Mona, 54 years, divorced, she has five children; two sons and 3 daughters, and they are all married except one of her daughters.

Throughout her 19-year-old marriage, her husband was strongly opposing the idea of a working woman and he spent his own money on the family. Some clashes intensified and happened with her husband due to money issues and lack of income, and these clashes affected on her children. At the age of 36, she decided to work.

Indeed, success was her ally, as she began to embroider oriental Abayas for one of her friends living in England, who was receiving her products on credit. But marital clashes was increasing because of her work to reach the extent of divorce.

At that time, Mona joined a sewing workshop because of her sewing experience and suggested to the owner, who was hesitant to accept her due to her old age, to hire her for week first with no wage. And indeed she proved herself and continued working in this workshop with excellence for a period of six full years until the workshop closed at the end.

Mona then moved to another factory named “Carrie”, owned by a Canadian businessman. Thanks to her experience and reputation, Mona supervised 70 female workers there. But the integration into work without stopping until late hours of the day had a bad impact, especially on her young twin daughters. She was forced to leave work at the factory and work from home and brought some female assistants either with her in her home or from their homes.

Hence, Mona knew about Al Tadamun Microfinance Foundation until she succeeded in obtaining an individual loan of LE 10,000 to expand her project and to increase its production and profits.

Mona wishes to move to a visible, known place to spread her good reputation on a wide scale. Examples of her ambition and persistence are that she took a training course on making copper accessories and through self-education on the Internet she learned the art of crochet.

Also Mona trains females on handicrafts in several different associations. “If I had a day without a job, I would be very sick, “she said. She advises every working woman to make all the effort and time required. 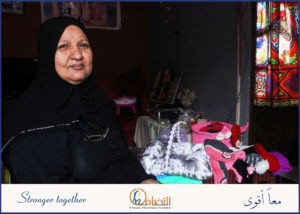